Evenings with WHW Academy: Care-full Practices, conversation between iLiane Fokianaki and Leire Vergar within the Communities of Learning Platform, Thursday, March 10, 2022. at 7pm via the zoom platform 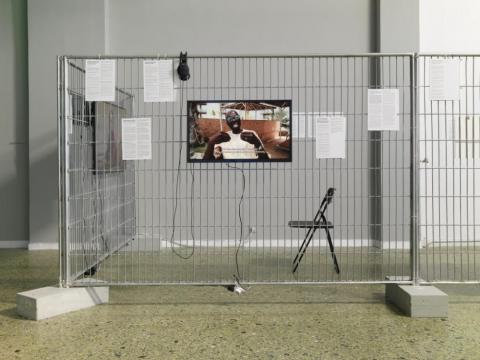 Care-full Practices, a conversation between iLiana Fokianaki and Leire Vergara

This conversation is hosted via Zoom platform and will be livestreamed on WHW Akademija’s Facebook page.

We are pleased to announce the launch of the fourth edition of WHW Akademija with a conversation between curators and educators iLiana Fokianaki and Leire Vergara, with whom WHW Akademija recently collaborated on several projects.

This online conversation will explore strategies of care, space, and knowledge production that various small and idependent organizations have been developing in a dialogue with their communities. Fokianaki and Vergara will each engage with the theme from their viewpoints and recent experiences.

The moderators for this event are Ana Dević of WHW and Adrijana Gvozdenović, a participant of WHW Akademija 2022.

► Liana Fokianaki: “Why Should We Care? Care-full Practice and Its Political Implications”

Through her current project The Bureau of Care, which focuses on the ethics and politics of care and how they have been corroded by neoliberalism, iLiana Fokianaki looks at the individualist idea of care while highlighting the contrasting legacies of Indigenous, feminist, and activist trajectories and the way they understand the ethics and politics of care through an interdependent spectrum. Examining this binary and its ripple effect on cultural production and work, Fokianaki proposes a care-full practice through the “personal is political” viewpoint of feminist legacies.

► Leire Vergara: “Space Is the Place/The Place Is Space”

Leire Vergara considers the research project Space Is the Place/The Place Is Space, initiated in 2018 by Bulegoa z/b, which Vergara co-founded with Beatriz Cavia and Miren Jaio. It analyzes the role of art as a critical practice that offers tools to stop, look, and position oneself in the world, to generate situations, and to imagine ways of living and producing space. Structured through periodic meetings, the project takes various forms, such as presentations, reading sessions, walks, territorial actions, and various artistic productions. Its name is taken from the Afrofuturist film Space Is the Place (1972–74), directed by John Coney and written by Sun Ra and Joshua Smith, which is paired wti iths inverted double, causing the notions of “space” and “place” to change positions. The mirror image of Space Is the Place/The Place Is Space emphasizes a circularity between the two terms, understanding “space”—according to the film’s fictional plot—as the need in art to project a utopian beyond, and “place” as the need to act on a set of given conditions.

Bulegoa z/b's project began in 2018 at the organization’s headquarters in the Bilbao neighborhood of Solokoetxe, with the intention of opening a space for reflection on the rapid transformation of ways of life caused by the growing touristification of the city. Since 1997, when the Guggenheim Museum Bilbao opened its doors, up until today, the city has gone through different phases of urban and industrial regeneration, presenting itself as a successful model applicable to any context based on a service economy where art and culture play a fundamental role. In 2019, this process was interrupted by the COVID-19 pandemic, raising new and urgent questions regarding the uses and production of the spaces we inhabit. In 2020, the Space Is the Place/The Place Is Space project developed a new chapter in Rome, entitled In qualche luogo lontano: Roma (Somewhere far away: Rome), which unfolded through multiple artistic contributions that revisited moments, remains, and potential utopias that helped to think about possible new relationships with the city.

BIOS
► iLiana Fokianaki is a curator, theorist, and educator based in Athens, Greece, and Rotterdam, the Netherlands. Her research focuses on formations of power and how they manifest under the influence of geopolitics, national identity, and cultural and anthropological histories. In 2013, she founded State of Concept Athens, the first nonprofit institution of its kind in Greece which she continues to direct. State of Concept has worked with artists such as Forensic Architecture, Kader Attia, Sanja Iveković, Laure Prouvost, Jonas Staal, and Hito Steyerl, among others, while collaborating with local and international curators such as What, How & for Whom/WHW and Nick Aikens. Fokianaki has curated exhibitions for Kunstinstituut Melly (formerly known as Witte de With), Rotterdam; Kadist Foundation, Paris; La Colonie, Paris; e-flux, New York; MG+MSUM – Museum of Contemporary Art Metelkova, Ljubljana; and Galerija Nova, Zagreb, among others. Her most recent project, The Bureau of Care (2020–22), received the European Cultural Foundation’s Solidarity grant. Fokianaki is currently working on the exhibition Machinations, opening in 2023 at Museo Nacional Centro de Arte Reina Sofía, Madrid (co-co-curator), and a group exhibition at Framer Framed, Amsterdam. She has developed lecture series for several institutions, such as “GOSSIPS” (2019) for Het Nieuwe Instituut, Rotterdam. Fokianaki is a lecturer at the Dutch Art Institute, Arnhem, and has lectured in academies, independent spaces, museums, and foundations around the world. She publishes regularly in journals such as e-flux and Frieze and has contributed essays to several publications. Her book Gossips: WomXn Gather was published in 2021.

► Bulegoa zenbaki barik (Bulegoa z/b) is an office for art and knowledge located in the Solokoetxe district of Bilbao, Spain. It is an initiative created around a shared interest in issues such as critical pedagogical practices, situated knowledge, and collaborative methodologies; feminisms and decolonial perspectives; processes of historicization and cultural translation; and social transformation and its relation to art. Bulegoa z/b is a platform inspired by the desire to bridge the gap between practice and theory. Its aim is to build a space of sustained discourse and hybrid situations where debate, discussion, and the exchange of ideas can take place and artistic projects can be materialized. To make this possible, Bulegoa z/b organizes seminars, presentations, screenings, performances, talks, conversations, and other activities. The members of Bulegoa z/b are: Beatriz Cavia, Miren Jaio, and Leire Vergara. Silvia Coppola is in charge of production and Auria Etxeandia of communication. www.bulegoa.org

This program is presented as part of the collaborative project Communities of Learning, Bridging the Gap of Isolation, initiated by What, How & for Whom / WHW and supported by the Culture of Solidarity Fund of the European Cultural Foundation.
The talk is part of a collaborative platform Communities of Learning supported by Kultura nova foundation.
The program is also supported by:
Kontakt Collection / ERSTE Foundation
Foundation for Arts Initiatives
European Cultural Foundation
City Office for Culture, International Relations and Civil Society
Kultura Nova Foundation
Ministry of Culture and Media of the Republic of Croatia
Trust for Mutual Understanding

Communities of learning is a platform that brings together five organizations from Croatia (What, how and for whom / WHW and the Living Atelier Dajht Kralj), Serbia (kuda.org), Germany (Neue Nachbarschaft / Moabit eV) and Greece (State of Concept), which includes several European regions with the aim of exchanging programs of independent and contemporary art production, which emphasizes non-formal art education and educational programs in working with more vulnerable groups, and creating new programs advocating participatory and horizontal joint action.