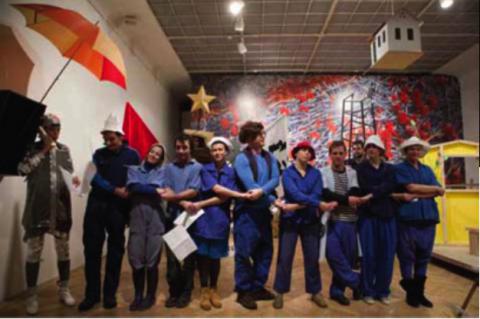 This one-day symposium Collaborative Change? - Commons, Networks, Exchange investigates emerging possibilities around collaboration, sharing and exchange and collective models of production, consumption, and ownership across a number of arts and non-arts fields.

Existing models have a long history in the construction and maintenance of community and provision e.g. meitheal, housing and agriculture cooperatives, credit unions, artists’ communities, etc. Network societies bring with them open and crowd-sourcing, user-generated content, crowd-funding and collaborative consumption, social networks with new economic models emerging. The aim of the day is to frame these shifts and developments in the context of a new urgency and discuss what they mean for the future of cultural work, education, local and alternative economic initiatives, funding and financing, communities and networks amongst other issues.

Two things mark our moment, arguably. The crisis in public finances and the debts burdened on citizens of a Europe whose currency is under threat from predatory markets and whose banking systems are failing. And this arrives with the ascendancy of a network society and economy whose impacts are becoming more apparent as we enter the second decade of the twenty first century. Aside from the political upheavals and the justifiable anger manifest in street protests, there have been other responses to the catastrophe in the form of a renaissance in earlier practices to moments of crises; practices of sharing, collaborating, lending and bartering. Equally, there has been a resurgence in civil society activism, community organization and political grassroots movements seeking to renew and rethink the ties that bind us together and new forms of affiliation. And this is happening when peer-to-peer and social networks, creative commons, open source, ‘the crowd’ are all heralded as new paradigms of possibility.

The disputes around the public and private ownership and control of knowledge and culture that marked the last decade have thrown the commons to the forefront of public debate. Platforms based on participatory and commons-oriented paradigms appear to absorb the social, the economic and the cultural as the network becomes the new space of the polis or at least its organizational base to a point where social networks are now attributed to instigating revolutions (if that is what they are) in the Maghreb and Middle East. More broadly, it would seem that sharing is now a public virtue with movements within the academy towards open-access and open-source seek to develop new modes of scholarly dissemination and sharing of knowledge. In addition, the practice of sharing source code is increasingly applied to realms beyond its origins in computer science and software development. There are initiatives where cooperation and sharing are the basis for new economic models and alternatives to the market primarily in terms of resources and sustainability. Equally visible for decades now in the art-world, are collectives built on a sustainable principle of production, where process, experience, authorship, responsibility and success are shared.

However, what is the value and meaning of these ideas, values and principles at a moment where they both contain the possibility of change and transformation but at the same are becoming the very means and terms for the marketisation and colonization of the social. What is at stake here? How should we negotiate these contradictions ?

This one-day event engages these questions and debates them in the context of crises and responses to the crises from within and outside the cultural field. It brings together artists, activists, organizers and thinkers from different international contexts and experience to consider and think through these issues, to reflect on precedents and models in operation, to exchange, examine and discuss.

This one-day symposium, co-organized by PhotoIreland and GradCAM and supported by the City Arts Office, Dublin City Council.