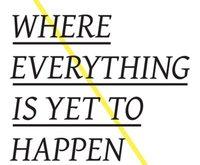 The time seems to have come to identify the crisis, not to consolidate things as they gain stability, given that we are surrounded by idlers living off private incomes who placidly exploit outdated rebellions that have become innocent, surrounded by people who wish to live without being dead. (Carl Einstein)

The backdrop to much of the recent debates on the relation between art and politics is a an erosion of art's utopian horizon, upon which its power to generate counter-concepts was based. Art's power lay in the ability to imagine things differently, in the rejection of the given, and in the subversion and transgression of the boundaries of a disciplinary modernity and its hegemonic rationality. Under the parameters of the disciplinary regime, the utopian imagination was fueled by ideas and practices of transgression, subversion and unbounding, based on the ideas of an "outside", a "beyond" and progression. These ideas gave shape to an entire economy of the imaginary, in which creative imagination and the ideas of an emancipatory politics were fused.

With the rise of what has been called cognitive capitalism and the society of control, in which the creative imagination and the modulation of the imaginary are put to the service as productive force and resource, the dialectics of affirmation and negation and the parameters of critique are subjected to tectonic shifts. This effects a crisis in the economy of the imagination itself, in the very ability to imagine things differently. Today, the static boundaries against which a dissident imagination was shaped, are on the move, subjected to management, calculation and evaluation, giving rise to novel configurations of power, in which the imaginations power to negotiate the limits of the possible is itself at stake.

The workshop CRISIS OF IMAGINATION sets out to explore the role of imagination in both, the discourse of contemporary art as well as creative industries. The goal is a revaluation of various different notions of imagination as the power to make an image. Such images cannot be fixed, since they only have meaning as long as they are in permanent movement, as sources of energy and intersections of decisive experiences, characterized by a rupture or a crisis that constitutes the way how we are making world, rather than seeing the world.

Is imagination the new labor force of cognitive capitalism? What kind of value is produced in these settings? Is there a subversive potential of imagination, no matter whether old or new, that would interfere with the uninterrupted fabrication of reality?

The seminar begins on FRIDAY with an introductory double-lecture by Florian Schneider and Anselm Franke, introducing theoretical, political and artistic positions and genealogies that help identifying the tectonic shifts currently underway in the economy of the imaginary, drawing on sources as diverse as Carl Einstein, Spinoza, or Michael Taussig and Bruno Latour.

The second part is conceived as a day-long collaborative workshop with subscribed participants. It will include film screenings, discussions, and a process of collective note-taking, the results of which will be edited and made public as a document. The workshop will be concluded at 7 pm with the screening of the film "Moses and Aaron" (1973) by Daniele Huillet and Jean-Marie Straub.

The workshop is the first in a series of short seminars under the title Crisis of Imagination that are loosely connected, organized as modules and will take in several places across Europe.

** Please confirm your participation at the workshop by sending an email to: delve@delve.hr.

WEIYTH seminars are part of the project Where Everything Is Yet to Happen, initiated with an international exhibition SpaPort 2009 in Banja Luka, Bosnia and Herzegovina, and developed through the collaboration of DeLVe and a team of international curators and artists. Continuation of the collaboration with a team of co-curators this year takes the form of seminars series that focus on individual topics opened through the first exhibition, among which are: non-essentialist models of community,
ethnopolitics, complicity, cooperation, belonging, politics of memory, culturalization of politics, all seeking to articulate some of the key issues of post-traumatic and transitional socio-political realities in the region.

Supported by: Ministry of Culture, Republic of Croatia; City of Zagreb - City Office for Education, Culture and Sports