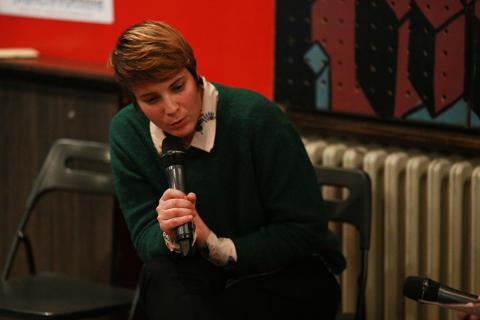 “Violin Revealed, an alternative guide to violin’s sonic life ~ emerged in January 2015 as a spontaneous series of reflections on the technique I use in my improvisational performance.” The need to systematize intuitive musical expression may seem contradictory at first, but it emerges primarily as a creative impulse aimed at deepening the understanding of contemporary sound creation with possible links in the study of bio-resonance, sensory perception, activation of cognitive mechanisms in intuitive creation, performance psychoenergetics, performance anthropology, acoustics, instrumental electro-acoustics, graphic design in general, graphic design and video design in general By developing notations from which graphic compositions are further derived - templates of musical experience, I came to a turning point, which required a basic theoretical environment and initiating a discourse on contemporary sound creation outside of outdated academic frameworks. vega aimed at a generation of younger creators, I am publishing the book "Trembling, a treatise on the nature of sound and an introduction to the theory of improvisation." The book will be published by the Auropolis Association of Multimedia Artists in March 2018. "

The Festival-in-Opposition is a platform for establishing the relationship between art, education, and the politics of improvisation. This platform is oriented towards the creation of temporary zones of grouping, exchange, and support of an improvisational practice that works/produces in sound, with sound, and around sound. Permanent event facilities - OUR 'Accompanyings', Improboxing (Material Exchange), Sound Installation and Reading Desk - initiate artistic production in a festival format, with the intention of affecting and conceptualizing improvisation as artistic, cultural, and socio-political (against) an attitude opposed to the commercialization, trivialization, depoliticization and predatory utilitarianism of art. Following the example of Company Weeks (an annual festival of free improvisation organized by Derek Bailey from 1977 to 1994) and Rock in Opposition (a movement of music bands that opposed the monopoly of the music industry during the 1970s), the Festival-in-Opposition does not aspire to the place of an institution with authority, already persists as a fragile hub of disjointed fluxes from the local and regional scene, just like those influences of creative energy that come from European and world metropolises.