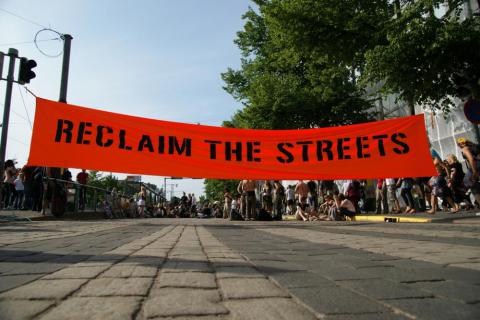 The film explains what the FTAA is, what it will represent in the future, and how people across America are resisting and fighting against it. This film shows everything - the resistance of the local population, the struggle of the working class, women organized in the fight against FTAA, Your Biotech Future, media activism, NAFTA Chapter 11, the settlement mechanism in the dispute between the state and investors and the ever-popular repression of the state to disagreement. Coming soon to your city! Footage from Akwesasne, Chiapas, Quebec, Sao Paulo and Tijuana along with a combined force of over 100 cameramen, photographers, freelance radio outlaws, writers, editors, technicians make this film ideal for your local anti-FTAA event. Realized by: Indymedia FTAA (Free Trade Area of the Americas) video workgroup Signs of revolt.

The "Miami model" is a term used by political activists to describe tactics used by law enforcement agencies during demonstrations against negotiations on a trade agreement on the Free Trade Zone of the Two Americas (FTAA). The protests over the meeting took place in Miami, Florida in November 2003. "Miami Model" is a documentary about the FTAA, a police operation in Miami and a political organization led by people from the Miami area. Indymedia: FTAA video workgroup

In July 2001, the leaders of the world's eight most powerful nations (G8) met in Genoa. Surrounded by a steel fence that marked the zone to which there is no access, the city center became a training ground for a brutal bloody weekend. Despite an unprecedented level of security, over 300,000 demonstrators joined forces and showed their dissatisfaction with the G8-led ruling systems, which increasingly resemble dictatorships, driven solely by the idea of increasing profits. Working on over 160 hours of DIY video footage from the protest, international groups of filmmakers from Italy, Ireland, and the United Kingdom were determined to show the events that followed those brutal days in Genoa. Thus, as a result, this film presents a radical narrative about the things that preceded the events, the events themselves on the streets, and ends with a long-term struggle for justice after the demonstrations.

It shows a gathering of protesters in September 2000 against a meeting of the International Monetary Fund - IMF at the World Bank conference in Prague. The film offers interviews with activists and demonstrators from the southern hemisphere who criticize and accuse the policies of the IMF and the World Bank, while at the same time following the preparations for the action in Prague, the day of the protest, and the consequences.

Behind the barricades - 3 short films of Seattle/DC/Prague​ [66 min]
An omnibus that summarizes examples of three different events from Seattle, Washington, and Prague. A careful look at all three examples will give impetus to the reaction to the closest symbols of capitalist oppression.

In 23 minutes of encouragement and inspiration, a protest against the World Trade Organization was shown on November 30, 1999. The time has come to overthrow the dictatorship of the economy and to start building a society based on true freedom.

Capitalism is dying out, 20,000 people are taking to the streets in Washington against the policies of the World Bank and the International Monetary Fund.

- CROWD BITES WOLF (23 min)
A meeting of the World Bank and the International Monetary Fund in Prague and an army of international rebels are waiting. The story of a man in the middle of a protest in Prague.

The film shows the history of the Reclaim The Streets movement from 1992 to May 1998. The idea began to take shape when the London RTS was preparing for big action in cooperation with a group of fired Liverpool port workers. It was a new alliance that went beyond just the tactical aspect but also made the state nervous. It all ended in riots in which police surrounded about 15,000 people who had gathered and entertained illegally in central London, two weeks before the general election. The film, which took 15 months to complete, was made with the intention of being a driver of emotions that cannot be shown in any other medium. Although by its nature, the film is probably the most subjective means of representation, and the camera is never objective, a documentary can still show reality to a large extent. More importantly, the film can be a means of social control, and if used successfully, can support a movement that faces almost always hostile media.

Reclaim the Streets (RTS) cannot be understood as a campaign, although some methods used in the film have these elements. Today, there are RtS groups in thirty cities that organize illegal street parties. Most of these groups exist only at the event itself, and many activists are involved in local campaigns for the rest of the year. There is no membership or official direction although many would like to see a broader global strategy. As a movement, the RTS is only four years old and can develop in unpredictable directions.