Series of discussions: An Archive/Live Archive/UnArchive and Public Library workshop 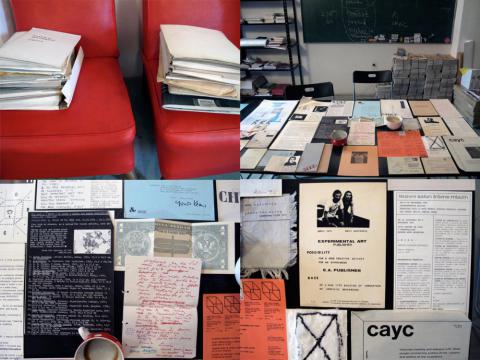 There are so many initiatives recently dealing with archiving of different artistic, cultural and historical materials, which are induced by the possibilities of digitization as a new round of 'actualization' and new spaces for dissemination of the material dealt with. The dominant framework of those initiatives is still institutional – by that, public/state institutions are employing contemporary tools in order to remain in their great narratives of 'history', 'heritage' and '(national) culture', to remain in control. However, we are more interested in initiatives which are invested in practices diverging from institutional and state strategies. Instead of conservation, we would like to think of 'live archives'; instead of nourishing canons, we would like to think of creation of 'history from bellow' as 'a counter-memory' – with all their possible implications.

Within that changed perspective on archives and libraries, we would like to think further: how to make conditions for breaking still authorial positions of 'a librarian' and 'an archivist', and of the ownership over the archived material? By sharing, would be the first answer, with its double-bind – as 'an openness of control'; or as its appropriation from the uncritical one.

Formation of the 'counter-memory' would imply observation of the past not in retrospective, therefore, it would mean observation of the past as more actual/recent then the present and more uncertain then the future (B. Buden). Then politics of archiving in terms of actualization of archived material would mean a saturation of politics, of an invention of politics contained in the archived material. Could un-archives and practices of un-archivist, un-librarian (as in 'everyone could be one...') be diverted from care&nourishing of the archived material which are employed in something called 'archiving science', towards different affectivity invested in it?

Within proposed framework, series of discussions will deal with creation of libraries and their connecting, and with specific archives, their editorial policies and distribution politics, collecting avant-garde and conceptual art, recording 'media art', etc; and within that of: (visual) poetry, experimental music, artists' books, diverse documentation, etc.

Two days program will bring together different archives' and libraries' initiators and archivists such are: Dušan Barok, artist, researcher and activist from Slovakia who initiated project Monoskop (http://monoskop.org/Monoskop), Kenneth Goldsmith, poet and artist from US who initiated project UbuWeb (http://www.ubuweb.com/), Marcell Mars, programer and activist from Croatia who initiated the project and the workshop Public Library (www.memoryoftheworld.org), and Simon Worthington, programer who co-founded magazine Mute from London (www.metamute.org) and the project Live Archiving and Users Journeys (both together with Pauline van Mourik Broekman).

Since 2005, kuda.org is dealing with the local practices of neo-avant-garde art from the 1960-1970s - The Continuous Art Class (http://www.kuda.org/en/continuous-art-class-novi-sad-neo-avantgarde-1960...), through research, publishing of books and putting-up exhibitions, during which many pieces of documentation, art works, artists books, publishing experiments, correspondences, etc. have been collected, and recently joined with new material thanx to the gift by the artist Bogdanka Poznanovic. This material is not properly available as it is not-yet archived in any sense. We would hope that this series of discussions, An Archive/Live Archive/UnArchive, would give us a kick to think through our future (un)archiving practices, in all its vulnerability of being based at the margins of the field demarcated by the institutions – public museums and private collections. Also, we would hope that the audience and participants would be benefiting in a multiple ways, by visiting this series of discussions and the workshop.

20h, public discussion on practices of UbuWeb & Monoskop, their politics and concepts of archiving, with Kenneth Goldsmith, Dušan Barok and Marcell Mars

20h, public talk/lecture: On Uncreative Writing by Kenneth Goldsmith (on questioning position of 'an original author' and of 'creativity'; on practices of plagiarism and appropriation in writing and poetry; on collage, sampling, theft)

Dušan Barok is an artist, writer and cultural activist involved in critical practise in the fields of software, art, and theory. He founded and ran a Slovak online culture portal Koridor, co-founded BURUNDI media lab and organised there a series of Translab evenings. Developed an open source tool for online group-help, backstage, and a number of websites and online databases for artistic, cultural and educational organisations. Together with Magdaléna Kobzová he organised a two-week long Summer Open Academy in Bratislava, a workshop-based event bringing together people from arts, technology, media and humanities. He has been involved in organisation of Multiplace network culture festival and, together with Peter Gonda, running a free art server Sanchez. In 2009 together with Tomáš Kovács started a free access living archive of writings on art, culture, and media technologies Monoskop Log.

Kenneth Goldsmith is an American poet. He is the founding editor of UbuWeb, teaches Poetics and Poetic Practice at the University of Pennsylvania and is a Senior Editor of PennSound. He hosted a weekly radio show at WFMU from 1995 until June 2010. He has published ten books of poetry, notably Fidget (2000), Soliloquy (2001) and Day (2003) and Goldsmith's American trilogy, The Weather (2005), Traffic, (2007) and Sports, (2008). He is the author of a book of essays, Uncreative Writing: Managing Language in a Digital Age (2011). As editor he published I’ll be Your Mirror: The Selected Andy Warhol Interviews (2004) and is the co-editor of Against Expression: An Anthology of Conceptual Writing (2011). In 2013, he was appointed the Museum of Modern Art's first Poet Laureate.

Marcell Mars (aka Nenad Romić) – in a wider community known as fighter for a free software, as a cultural researcher and as a social provocateur. Marcell is one of the founders of Multimedia Institute - mi2 and net.culture club mama in Zagreb. He initiated GNU GPL publishing label EGOBOO.bits, started Skill sharing regular informal meetings of enthusiasts in mama + Skill sharing's satellites g33koskop, 'Nothing will happen' and 'The Fair of Mean Equipment'.

Series of discussions An Archive/Live Archive/UnArchive and the workshop Public Library are part of the project Aesthetic Education Expanded (www.aestheticeducation.net), a collaborative project by Berliner Gazette, Kontrapunkt, kuda.org, Multimedia Institute and Mute and is supported by the programme Culture 2007-2013 of the European Commission.