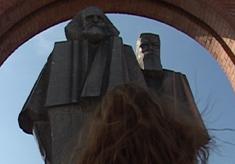 A docu-fiction about statue parks, museums and theatrical re-enactments of communism. The story emerges through 3 different perspectives: an objective account focusing on the reinterpretation of communism as kitsch or as a house of horrors, a subjective memoir mixing the personal and the political to highlight the process that has turned the natives into tourists of their own history, and a direct cinema reportage told through the gestures and languages of tourists. By using multiple voices and styles, Red Tours seeks to question the meaning of documentary and the politics of montage.

“From age to age, as its shape slowly unraveled, Eastern Europe was already the land of enigmas. Red was already the color of hell, of sinful passions, and the blood of sacrifice. Frightened by their dark instincts and unspeakable desires, the West continues to project their own demons onto the East, as a way to exorcise them."

"I remember when I first saw these statues in their original locations. It was in the summer of 1991, when we made a pilgrimage together to the capitals of the former Iron Curtain. To me, they looked like grim phantoms from another world. I felt no connection with this gathering of ancestors, who were not my ancestors."

Video by Joanne Richardson & David Rych
Produced in the frame of Transient Spaces, a project by uqbar, Berlin.