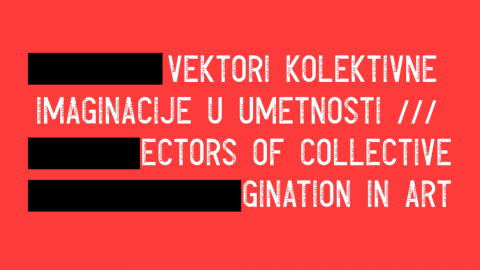 In the conversation to follow, also called Art Groups and Socio-Political Engagement, we will discuss links between art groups and leftist movements, organisations and political parties before World War II and during the 1960s, as well as issues about political organising in art. Vida Knežević, an art historian from Belgrade, will talk about the illegal group Life (Život), active in the period between the two World Wars in the Kingdom of Yugoslavia, which was part of a revolutionary movement organised by the Communist Party of Yugoslavia. Jacopo Galimberti, an art historian from Italy, will focus on the work of Group N, which developed its collective artistic practice during the 1960s in the intellectual-political context of innovative Marxist thinkers – the operaista movement. Group N was simultaneously engaged with the New Tendencies - an international movement in art that gravitated around the Zagreb Gallery of Contemporary Art between 1961 and 1973.

Vida Knežević is an art historian, curator, cultural worker, member of Kontekst collective whose work is based on a process of connecting critical theory and practice, the field of arts and culture with wider social and political effects. From 2006 to 2010, she was working on the Kontekst Gallery project. From 2008 till 2010 she was teaching at the Advanced Vocational Studies School of Fine and Applied Arts in Belgrade. In 2008 she completed her MA studies at the Department of Art and Media Theory of the University of Arts in Belgrade, and in 2019. she completed her PhD thesis entitled „Theory and Practice of the Critical Left in Yugoslav Culture (Yugoslav Art Between the Two World Wars and the Revolutionary Social Movement)”. Since 2014 on, she has been one of the editors of the educational project and the left online magazine Masina.rs, where she deals with the relationship between cultural, art and media production, economy, politics and activism.

Jacopo Galimberti is a postdoctoral Fellow at the University of Bologna. He has published extensively on the connections between art and politics in the twentieth century, in journals such as Grey Room, The Oxford Art Journal, Art Bulletin, and Histoire de l’Art among others. He is the author of Individuals against Individualism. Art Collectives in Western Europe (1956-1969) (Liverpool University Press, 2017), and co-editor of Art, Global Maoism and the Chinese Cultural Revolution (Manchester University Press, 2019).