Prelude into past - Boris Buden and Želimir Žilnik 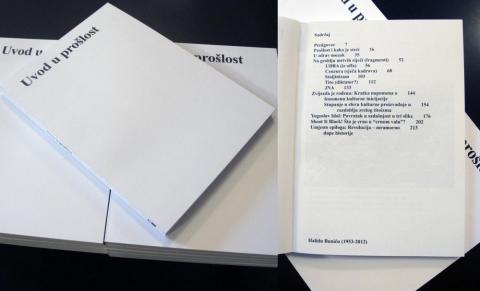 Prelude into past  - Boris Buden and Želimir Žilnik

"This is not a book about the past. It is an introduction to a problem called the past."

Book title: Prelude into past
The book was realized by: Boris Buden, who wrote the essays and
conducted a conversation with Ž. Žilnik
Želimir Žilnik, answered B. Buden's questions, verbally and in writing format
kuda.org, book initiators - edited, redacted, and coordinated
Žiga Testen, graphic designer - gave the final form of the book

From the preface: “... This is a book that seems to be dealing with a completely specific segment of the past, something that was once called a cultural history. However, this cultural history does not treat it as a special discipline of historiography that takes on its subject what has in the past gained the status of cultural property. For this book, cultural history is the very form in which we are today pointed to the past. To the extent that we are aware of the past, we are aware of it as a culture. Specifically, when this book deals with the cultural production of the former Yugoslavia, about the films or about the so-called film language of director Želimir Žilnik when it discusses cultural conflicts, their actors, the relationship between politics and art, the economic assumptions of film production and its social effects, it is not mentioned in the disciplinary sense of one, say, the history of Yugoslav film, that is, the individual film work of a certain director, whereby the categories of society, politics, and economics serve to contextualize one by one purely cultural narrative. Culture doesn't happen in some pre-determined economic, political and social context; as such it is always an economic fact and a political factor and a social product. She does not tell us what the past really was, but it was that past in her presence, actuality, uncertainty, openness. It is the past beyond the difference between the present and the future...” “...one of the main intentions of this book - to provide resistance to authoritarian canonization as the divine right of institutionalized cultural practice, to sabotage the project of national heritage, to point to its immanent contradictions, falsifications and manipulations cultural and social values, its ideological function and political abuse. Not only the film work of Želimir Žilnik, but the social, political and moral dimension of this work, are contradictory to any canonization, especially to that national culture...”

Project and the Book "Introduction to the Past" is a part of the research project by Center_kuda.org and associates through which the analysis of the social, cultural, and intellectual heritage of the former Yugoslavia, Vojvodina and Novi Sad is carried out through the projects "The Continuous Art Class", "Media Ontology" and "Political practices (post-) Yugoslavian art"(http://kuda.org). These projects provide a new reading of the progressive practices of the Neo-Avangard today and open a new way of communication between these practices and contemporary art production. The publication was published within the project "Individual Utopia Now and Then - Discontinuity of Generation Dialogue or what do we have in common?".

The book "Introduction to the Past" is published in editorial kuda.read, which is devoted to exploring a critical approach to new media, politics, new relationships in culture and art theory and practice.
The book can be downloaded free of charge in pdf. format via the link at the bottom of this page.