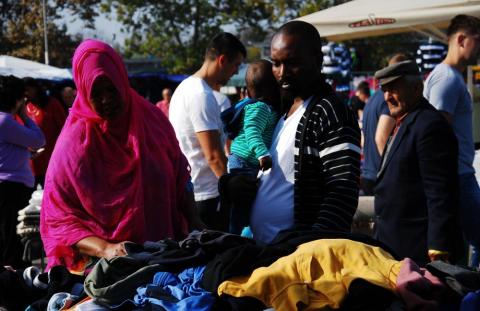 As part of the exhibition, more than 20 of Žilnik’s films will be available for online viewing. Many of these are rarely screened, and all are being made available online to this extent for the first time. The films trace various periods and different working conditions within Žilnik’s practice. They are organized in five sections, each available for viewing during the exhibition for two weeks.

The descriptions of the films were composed using material provided by Želimir Žilnik, primarily through several long conversations in Novi Sad and Zagreb, which extended over many months. They are stories that follow the curiosity of the curators surrounding Žilnik’s memories of the experiences of making each film, which he patiently and generously shared. As personal traces such as these open up future research and interpretations, the particular method of their collection, if there was one, was described by Želimir with yet another story: “As Mao Zedong said to his successor Hua Guofeng: With you in charge of business, I can relax.”

Illegal migrants and asylum-seekers are housed in refugee centers in Serbia following dramatic flights from the war and destitution gripping areas in North Africa and the Middle East. These people must pass through a complex period of adaptation to life in Serbia, though in most cases their aim is to arrive in countries within the European Union. This incisive docu-drama highlights the socio-political context in which they show their individual worth, in the process becoming protagonists with whom viewers can identify, whose struggles through adversity and whose fates they can understand.

The film represents a series of portraits and situations people found themselves in after being made redundant during the time of economic reforms which were supposed to establish market economy in Yugoslavia. In the interviews, people speak about their doubts and confusion, because they had been expecting socialism to give them more social security. They criticise the parasitic bureaucracy, they sign in to leave for Germany and work there, since Yugoslavia has signed an agreement on taking over workforce around that time.

The First Trimester of Pavle Hromiš

This television film is about a fifteen-year-old Pavle Hromiš who, obeying the will of his parents, leaves Germany and goes to live in Yugoslavia with his grandmother. He stays in the village of Kucura, attending secondary school. He meets new friends and has problems with the language and the different curriculum. The only place he feels fine is in the aeronautic club where he practices hang gliding – from the height of a couple of hundreds of meters, the landscape where he lives now remind him of the ones he has left. Most of the material is documentary, and it was a basis for a docu-drama to be filmed the following year – "The Second Generation".

Tenants of one old building in the centre of Münich are featured in this film: most of them are foreigners who work in Germany as "guest workers" (Yugoslavs, Italians, Turks, Greeks etc.). In their mother tongue, each of them tells who he or she is, and briefly talks about their major worries, new hopes and plans for the future.

This film is about people who emigrated to European countries during the war years of the nineties. They have lived there for years, had children and took them to schools. In 2002 they were in the “process of readmission” – in a severe and inhumane police actions they were collected from work, from schools and their homes and returned to Serbia. This is the story of two friends (Kenedi and Denis) and Ibinci family from Kostolac during the first couple of days after they were returned at the Belgrade airport. We see them trying to find accommodation, searching for friends and other family members. Kenedi goes to Kosovska Mitrovica where his family used to have a house, to which he now does not have access. The focus of the film is on the position of the Roma people as the most endangered part of the returned population.