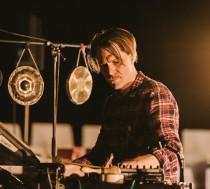 Andrea Belfi is a drummer, composer, and experimental musician. He lives and works in Berlin. He started playing drums at the age of 14, studied art in Milan, and since 2000 he has been completely dedicated to music. Over the last twenty years, he has developed a unique style of drumming thanks to the experience he has gained through working in the fields of experimental and electronic music, rock, and improvisation. In his works, he combines elements of Italian minimalism, abstract rhythmics, and modular synthesis. Its mesmerizing rhythms and textures create impressive soundscapes.

So far, he has released five solo albums and over fifty collaborative works on labels such as ROOM40, Miasmah, Häpna, Die Schachtel, Constellation, Blue Chopsticks. His interest in contemporary art prompted him to create sound installations that he presents throughout the United States and Europe. This artistic practice enabled him to collaborate with visual artists such as Angela Bullock and Aldo Tambellini. The list of music artists and collectives with which he collaborated is wide and includes Karla Božulić, David Grabs, Stefano Pilia, Aidan Baker, Benny Jans Nielsen, and others.

As part of the guest appearance in CK13, Andrea Belfi will present a part of the material from the upcoming solo release of "Ore" through performance and hold a workshop with local musicians from April 15, 2017. to 18.04.2017.

Andrea Belfi's guest appearance is realized within the project New in Popular Music, which questions the relationship between contemporary and new popular music. Although popular music may have commercial potential to the detriment of the quality of musical expression, innovation, and participation, it, in turn, exudes autonomous tendencies in musical creativity. Taking into account this ambiguity, the project seeks to mark progressive tendencies in contemporary music by hosting composers and musicians who are active at the crossroads of contemporary popular and so-called. serious music. By implementing these tendencies through performances, workshops, and talks, we want to open new spaces of music research and production, and to encourage actualization and contextualization through re-examining the current situation on the local music scene.

The project New in Popular Music is being realized in cooperation with the Youth Center CK13 and the Center for New Media kuda.org with the support of the Italian Cultural Center from Belgrade.

Andrea Belfi's guest appearance is also realized within the wider project "Aesthetic Education Extended", which is realized in cooperation with kuda.org with the Multimedia Institute from Zagreb, Kontrapunkt from Skopje, Berliner Gazette from Berlin, and Kulturtreger/Booksa from Zagreb.

The project is supported through Creative Europe (2014-2020) program of the European Commission, including the support of the Ministry of Culture and Information of the Republic of Serbia, the European Cultural Foundation Amsterdam - BAC program, the Provincial Secretariat for Culture and Public Information and the City of Novi Sad.