Media against Democracy? - The Commercialization of Internet and the Crisis of Media 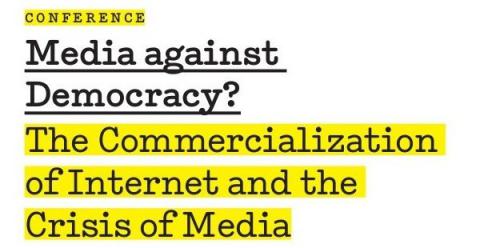 Multimedia Institute, Kurziv and Kulturtreger are organizing the conference:
Media against Democracy?
The Commercialization of the Internet and the Crisis of Media
24/04 - 26/04/2014 @ Goethe Institut, Vukovarska 64, Zagreb

The media and journalism are undergoing a turbulent and painful period of restructuring. Joint forces of disruptive technological innovation and economic crisis have pulled the rug under the ailing print and broadcasting media and their production models. Journalism is being undercut by parallel processes of deskilling and lay-offs. Media reporting is increasingly becoming uniform and reduced to opinionated journalism, agency news and press releases. However, the roots of this process of economic rationalization are not of recent making. Although the internet is frequently blamed for obliterating the business models of traditional media, this has only precipitated the fundamental problems of media in contemporary capitalist democracies that were set in motion in the decades before the internet with the growing concentration of media ownership and commercialization of media content.

At the same time, the early democratizing promise of the internet to allow everyone to access the broadest public seems to have been eviscerated. In many ways, its success proved to be its failure. As it transformed our communication, our economies, our every day, it failed to displace the dominant operations of social and global power. As the recent revelations of blanket surveillance of citizens had shown, it made everything that has become more democratic more fragile in the face of power. And we could claim that the same economic forces of commercialization, concentration and monopoly that plunged the print and broadcast media into a crisis spiral decades ago are now driving the internet into a similar crisis, only amplified by the capacity of technological control over communications. The growing economic streamlining of the media is foreclosing their democratic premise.

The conference proposes to look at the intertwined processes of commercialization of the internet and the crisis of media and journalism. On the analytical side, it proposes to approach the predicament from the framework of the political economy of communication, while on the practical side it wants to look closer at the future-facing media and journalists and the prospects of progressive media reform in Croatia. To discuss this it will bring together prominent scholars, media professionals, political activists and policymakers, including Des Freedman, Leopoldina Fortunati, Robert W. McChesney, Drago Hedl, Rüdiger Rossig, Milan Živković, Rasmus Fleischer, Marisol Sandoval, Marcell Mars, Sebastian Sevignani, Ladislav Tomičić, Brankica Petković, Nada Švob-Đokić, Helena Popović, Vesna Kesić, Slavica Lukić, Sebastian Mondial…

The Schedule of the conference could be found here.

The conference is organized by Multimedia Institute, Kurziv and Kulturtreger, in collaboration with kuda.org.

It is organized within the series of events "Media of Subjection, Media of Liberation" of the platform Aesthetic Education Expanded, a collaborative platform of Berliner Gazette, Kontrapunkt, kuda.org, Multimedia Institute and Mute and is supported by program Culture 2007-2013 of the European Union.

Supported also by: Ministry of Culture of Republic of Croatia, City Office for Education, Culture and Sport of the City of Zagreb