Kristian Lukic: The Media Practice Collection of the MoCAV 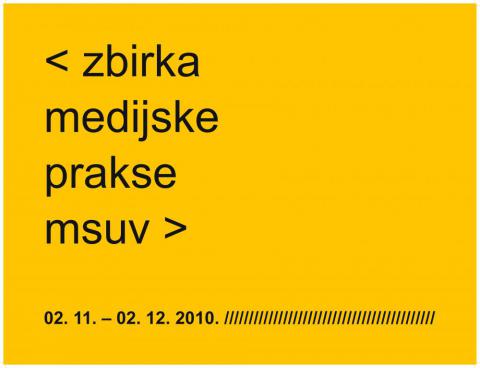 The Media Practice Collection of the Museum of Contemporary Art Vojvodina

The Media Practice Collection of the Museum of Contemporary Art Vojvodina is established with a view to locating and contextualising the artistic practice referred to under the common designation of media practice, usually connected with digital media and with art created as a result of the logic of digital media, information, communication and network technologies. The art works and the artistic practices featured in the collection represent a historical cross-section of artistic production operating within a broad spectrum ranging from computer art, through web art, net.art and installations, to computer games and modes.

The project of establishing the Media Practice Collection of the Museum of Contemporary Art Vojvodina is faced with a number of ontological aporias. To begin with, the following question arises: what is the function of the Collection as a part of the Museum, whose purpose is to collect, process, preserve and exhibit art works, in a network society? Of particular import is the question of the role of the Media Practice Collection, the artistic practice of digital media or art where digital media and network technologies are part of the nature of art works. Of the four aspects of classical museology, exhibition practice, that is, the communication of media art has become the dominant one. In digital art, the focus is shifted from the safekeeping of art works towards distribution and archiving on as many media, servers, disks, DVD’s or magnetic tapes.

The Media Practice Collection of the Museum of Contemporary Art Vojvodina is made up of art works that are or could become a part of other collections; the Museum of Contemporary Art Vojvodina, in cooperation with the artists, has chosen a model which does not change the character of artistic practice by removing it from its surroundings or by imposing limitations upon it in the form of limited series or limited quality. This form of the status of reproductive art works strives to preclude the possibility of artificial shortage, and on the other hand, it abolishes the alienation of art works which, following the primary buying up, enter the chain of financialisation and speculation that brings profit to art dealers and not to the authors. It is certain that this form of parasitic existence depending on the work of others is a real problem in contemporary artistic production, particularly pronounced in connection with the works of cult artists who no longer create and whose works serve as platforms for investment funds.

Establishing a museum collection of art today means fulfilling the presumed role of a social institution in the context of value, where collecting, processing and preserving artistic goods, that is, the accumulation of artefacts ceases to be the primary category. Instead of a mass accumulation of goods, the basic role of the Museum, as a social institution, is to establish categories of value, which, naturally, would not be the value categories of good or bad art and artistic practice, but would fulfil a role similar to that of a search engine in the world of the Internet. According to the Russian theoretician and mystic Fyodorov, the basic role of the Museum is to resurrect each living being that has ever lived on the surface of the Earth with the help of advanced technologies; in view of the fact that his vision is being realised today in a sense, the question arises of the actual position of the Museum today. The key social and political issue of the network community is the classification and structuralisation of knowledge. In this sense, the Museum (Institution) can take on the role of value marker in the current social reality, singling out certain phenomena and practices that shape the social reality wherein they function or which they reflect. This apparently restrictive approach is a possible reaction to the concept of the so-called art in the age of culture, cultural industries and the development of the media and creative industry, where art is merely a niche in the social distribution of work and capital.

Such a model of the collection is one of the possible models of the economy of art and economy in art, where the focus is shifted towards individual and social responsibility and voluntariness in supporting authors and creators. The basic question is whether collectors and institutions would want to invest in an art work (that is, an author) that can be possessed by everyone and that cannot provide a satisfactory profit margin. Will the institution of reputation and social status be enough to replace financial and symbolic capital?

In chronological terms, the Media Practice Collection of the Museum of Contemporary Art Vojvodina starts from the work Computertapebody by Bogdanka Poznanović, dating from 1973, which, on the one hand, reflects the narrowing of personal and social freedoms in the Socialist Federal Republic of Yugoslavia in the mid-1970’s, the atomisation of protests and the intensifying of authoritarian tendencies, whereas on the other hand, it brings into question technological development and the numerical marking of the population. Peđa Šiđanin’s computer graphics C5, dating from 1987, provide an example of early experimentation with the formal and technical graphic possibilities of computer technologies. The telematic project Aspects of Gaia by the same author, dating from 1989, was realised at Linz for Ars Electronica, and was initiated by Roy Ascott. The work arose from the awareness of the growing global community of artists who worked relying on computer technologies towards the end of the 1980’s, and constituted a kind of mapping of global topoi featuring digital artistic practice and activism.

The famous website by Vuk Ćosić, Documenta Done (1997), is a classic of net.art, wherein Ćosić showed the eclectic nature of art history and sublimated the increasing problem of copyright control. Documenta Done is a “stolen” website of the famous international exhibition that is organized in Kassel every 5 years. The work Absolute Sale by association Apsolutno from Novi Sad, dating from 1997, is a fictive online auction within the framework of which, starting as of the year 2000, one can book and buy an as yet unborn artist from Eastern Europe. This work, on the one hand, deals with the phenomenon of online auctions and the reigning supreme eBay, and on the other, with the specific position of Eastern Europe after the fall of the Berlin Wall. The work The Greatest Hits, dating from 1998, shows the vulnerability of biological (human) and computer systems alike. It was realised in the form of a CD-ROM containing a computer virus that is activated at a certain moment and blocks the work memory. Andrej Tišma’s Electronic Art in Serbia 2000 offers an ironic view of the work of net artists in Serbia in the year 2000, whose creative environment was marked by frequent electric power shortages. Within the framework of the project PPresidency by the PP group, dating from 2001, Zita Majoroš and Katarina Šević explore communication problems and the effects of contemporary art on art “users”.

The work Hello, World by the Vacuumpack group, dating from 2007, deals with the advent of a newly created script, arising within the framework of contemporary forms of communication through the use of new technologies, where keyboard characters are used as pictograms for often very complex notions, apart from the usual “smileys”. Vladan Joler’s work MCTE, dating from 2008, is a game-mode of the famous Sims game, wherein the possibility of interaction is eliminated and the player watches helplessly how the game characters become nervous, then hysterical due to the passivity of the player, and the whole thing ends with the characters’ death. In his work from 2008 entitled In Possession of a Post Office Credit Card, Heath Bunting questions, through the act of possessing a credit card, the possibilities of participativeness in British neoliberal high culture. In Vladimir Todorović’s 2009 work Nildigree, one invests, by way of a computer game, a simulation of broker-type software, in specialised nature funds such as Global Coral Reef Fund, Emerging Rainforest Fund or Taiga Equity Classic. Stevan Kojić, in his 2010 work The Self-sustaining Systems of Absurdity, deals with the theme of eco-technology and the so-called sustainable development, reflecting the absurdity of economic and technological progress and eco-ideology.