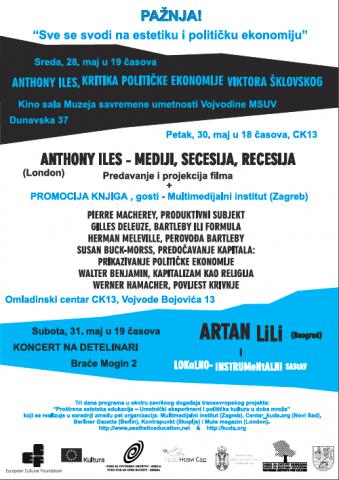 With Mallarmé's quote "It all comes down to aesthetics and political economy", kuda.org announces and invites four days of programs within the final event of the trans-European project "Extended Aesthetic Education - Art Experiment and Political Culture in the Age of Networks".

The first part of the joint event took place in Zagreb from 21-24. May 2014, organized by the Multimedia Institute mi2. This project is another in a series of projects and initiatives launched by Centar_kuda.org, now for more than a decade, and which sought to critically intervene in the field of research and artistic and social experimental activities in the field of artistic and cultural creation from the standpoint of institutional criticism and cultural criticism. politics. In the face of the processes of cultural industry and culturalization of politics and art, the collective tries to map and strengthen the points of criticism and resistance to the commodification of the results of artistic production and then attempts to transform and critique production relations that are reproduced in the field of artistic creation and non-artistic social processes. political ”matrices, which are ultimately a consequence of the recuperation of people. Anthony Iles' lectures on Adorno's topic of aesthetic production relations and acquaintance with the London rave scene and culture from a critical perspective based on primary activist experience open important issues of art policy and mutual determinations of artistic and non-artistic social processes. Publishing new titles with a collaborative network of individuals and partner initiatives and organizations puts a new form of action and cooperation on the scene of publishing policies, and the titles themselves enrich the critical production of each social environment. Finally, the concert in the neighborhood, once a workers', and today a settlement of unemployed and socially and culturally marginalized residents of the city, includes a local initiative that in cooperation with the Center project-shaped and created space for decentralization and criticism of institutions and organizational forms of cultural institutions. The program consists of the promotion of new books, lectures, and concerts with associates from Zagreb and London:

Wednesday, May 28, in the cinema hall of the Museum of Contemporary Art of Vojvodina, MSUV, Dunavska 37, at 7 pm, there will be a lecture "Critique of the political economy of art by Viktor Šklovski", lecturer Anthony Iles (critic, researcher, writer and editorial team of Mute magazine from London).

Saturday, May 31, Centar_kuda.org and MZ Radnički, Detelinara are organizing a free concert of Artan Lili from Belgrade with special guests at 7 pm on the plateau in front of the premises of Center_kuda.org, Braće Mogin 2. This program is part of the multi-year project "Aesthetic Education Extended - Art Experiment and Political Culture in the Age of Networks" which is implemented in cooperation between five organizations: Multimedia Institute (Zagreb), Center_kuda.org (Novi Sad), Berliner Gazette (Berlin), Counterpoint (Skopje) and Mute magazine (London)

The last day of the program is a concert that includes a local initiative and the project "Local policies and urban self-government" dedicated to strengthening local self-government policy and civil society, through education of tenants' assemblies and revitalization of local self-government in housing http://detelinara.org/ *** The entire project is funded by the Culture Program 2007-2013 of the European Union, the European Cultural Foundation, the Ministry of Culture and Information, the Provincial Secretariat for Culture and Public Information, the Open Society Foundation Belgrade, the Institute for Culture of Vojvodina and the City Administration for Culture of the City of Novi Sad.