INCREDIBLE MISSION in the Youth Center CK13, presentation of the project by artist János Sugár - Wash Your Dirty Money With My Art 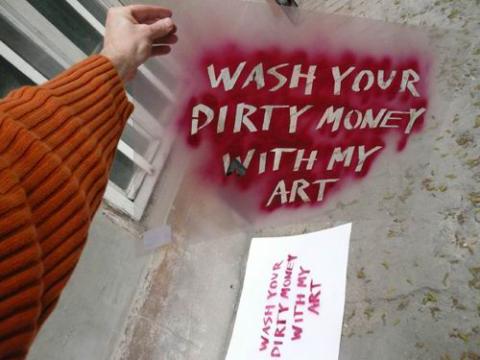 As part of a series of conversations LESS LIKELY MISSION, Centar_kuda.org, and Cultural Center REX from Belgrade are organizing a visit by Hungarian artist János Sugár and a discussion about the project

"Wash your dirty money with my art" - János Sugár in court

Budapest artist János Sugár exhibited his work "Dirty Money" at the Kunsthalle. stencil for inscription/graphite "Wash Your Dirty Money With My Art". While the stencil itself experienced the usual reception of the institution and the audience, the graffiti that János Sugár wrote in front of the VAM Design Center and the KOGART private museum caused the reaction of that private museum in the form of a lawsuit. Janos was fined 7,000 euros but refused to pay it. The trial is still ongoing. Given that Sugár touched the very core of the functioning of the art system in the capitalist social environment with this work and actions, a question arises that inevitably paraphrases the name of the famous Zagreb curatorial collective: What, how, and for whom next?

Conceptual artist János Sugár studied at the sculpture department at the Hungarian Academy of Arts in Budapest (1979-84). Between 1980-86. He worked with Indigo, an interdisciplinary art group led by Miklós Erdély. His work includes sculptures, installations, performances, video art, film as well as theoretical work. He was part of the board of the Balázs Béla Film Studio (1990-95) and has been teaching art and media theory at the Intermediate Department of the Academy of Arts in Budapest since 1990.

INCREDIBLE MISSION is a series of presentations and talks within the Cultural Center REX, where artists, architects, cultural workers, creators of cultural policies and activists from Serbia and the countries of the region present their projects that have been realized or partially realized in the last few years but have not, in the opinion of their initiators and protagonists, fulfilled, or fully fulfilled, their chosen, planned or assigned mission. Presentations and discussions should locate and analyze the discrepancy or gap between the intended and achieved in recent artistic, cultural-production or construction practice in the region (construction practice means not only construction, but also the construction and upgrading of state and social conditions: from the establishment of political movements and parties, specialized state agencies, citizens' initiatives, and civil society institutions).