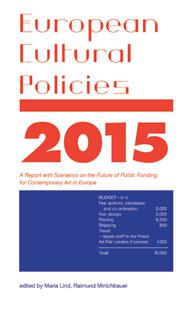 European Cultural Policies 2015: A Report with Scenarios on the Future of Public Funding for Contemporary Art in Europe

From the introduction: In 2015 art is almost completely instrumentalized in the economic sense, regardless of whether financing is private or public. Art then services either national or European interests that wish to construct a certain identity: it is a desirable marketable commercial good for private ownership and it contributes to regional development and provides society with new creative employment opportunities. Visiting art institutions is a popular, easily digested leisure activity. In 2015 art can be used to stave off undesirable fascistic and nationalistic tendencies in society. This is one side of the coin, according to the eight contributors to European Cultural Policies 2015: A Report with Scenarios on the Future of Public Funding for Contemporary Art in Europe. The report is a collaboration between IASPIS (International Artist Studio Program in Sweden) EIPCP(European Institute for Progressive Cultural Policies) and åbäke, an international design group based in London, made on the occasion of the Frieze Art Fair 2005. The other side of the coin is a development towards a more critically oriented art, which has found its own ways and means and established self-supporting micro-systems. This art is not necessarily adapted for exhibitions and other established institutional formats, and it is an important factor in civil society. It also encompasses more forms of collaboration than does present-day art.