From Creative Work to Creative City - Seminar of the Kontekst Collective, Belgrade 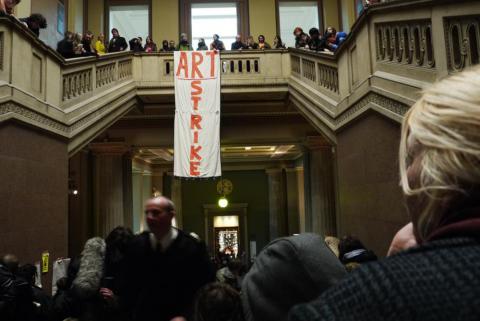 From Creative Work to Creative City

Organisation: Kontekst Collective
In the frame of 52. October salon "It’s Time We Got To Know Each Other"

In the precarious situation that we are all in, we are forced to accept to work under conditions that are not legally defined or guaranteed. Based on our own situation, we pose questions about our working and living situations: about the price of our work, the possibilities of a working space, working hours, health and social insurance, etc. To what extent are vague conditions and “contracts” prevalent – those based on dependence, flexibility, uncertainty, conditionality, blackmail and exploitation?

What is also quite noticeable is a lack of public debate on the above issues. Additional areas of concern include the marginalisation of critical artistic production; the abolition of undesirable cultural institutions; the practices of censorship and autocensorship in cultural production at various levels; the suspension of autonomous initiatives and spaces; non-transparent redistribution of budgets; as well as the concentration of power within the ruling political party framework. These are only some of the problems facing those employed in the sphere of culture today. However, one of the key issues, it seems, are the new forms of exploitation of labour in the fields of culture as in all spheres of social production.

Such contemporary capitalist system increasingly views culture as a field for achieving economic gains . Aggressive promotion of the concepts of creative class, creative industry and creative cities as part of the neoliberal deregulation, over and exploit various social goods such as public sector, public resources, public knowledge. By transferring matrices from developed capitalist countries, Serbia’s implementation of cultural policy has actively contributed, over the last few years, to establishing a relationship of domination and subordination, which ultimately places cultural employees in an impossible position.

The programme From Creative Work to Creative City takes the form of a two-day seminar. Through lectures and discussions, we shall review the observed problems pertaining to the conditions in which we all live, learn and work today.