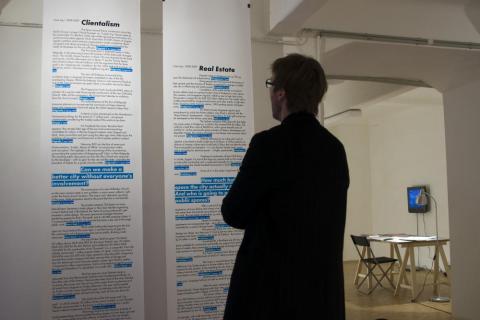 The Cities Log is an urban chronology, depicting a rough section through developments of cities in the Western Balkans (2008 – 2010). It displays spatially important events, decisions and discussions set in the context of fast capital investments, newly emerging power relations and the challenge brought forward by the transition into new engagements of citizens.

During the last two decades, since the start of the 1990s, Albania and the separate post-Yugoslav republics have each individually charted their own path, and while their societies develop along these different lines it is striking to see how much they share in terms of issues concerning urban development. The Cities Log brings forward vital topics regarding the (future of) the cities like Belgrade, Kotor, Novi Sad, Podgorica, Prishtina, Pula, Skopje, Tirana and Zagreb – topics that read as if set between a crime scene investigation and a comic story.

“Privatisation, clientalism, creative abuse of laws and regulations seem commonplace in a context affected by ‘wild’ urbanization and fast capital investments set within the horizon of a neoliberal context. At the same time something else starts to get clear: the first, uneasy resistance to these exploitative forces takes shape. Here and there, inhabitants start to organise themselves, civil organisations start turning their eye to the city and journalists started digging through the lucrative dirt.” (from the text of the project)

The chronology is accompanied by a select number of documentaries, like video fragments from RTV B92’s Insider program on construction mafia, visual documentation of the resistance of the inhabitants around the Fifth Park in Belgrade against conversion of ‘their’ park into a construction site - or the toolbox developed by Right to the City to act against unfavorable transformations in the public space of Zagreb. As urgent as this resistance may be for the specific (local) cases brought forward here, they hint as well to the transformations currently taking place in many other cities throughout the world.

The Cities Log is part of the first and developing case study within the project “Individual Utopias” (www.pro.ba/bs/utopije/), initiated by SCCA/pro.ba Sarajevo and supported by the Swiss Cultural Programme in the Western Balkans.